In this video, our CEO Claude Letourneau explains the competitive landscape of direct cost carbon capture and how it will kick start what we call the “carbon market” to the EnergySource Innovation Stream.

Climate change is one of the greatest challenges of our time. We now have a tipping point where we have to deal with CO2 emission going up in the atmosphere because the natural CO2 filters, we have overloaded our trees, and the ocean cannot cope with anymore manmade CO2. We are left with a net imbalance – accumulating in the atmosphere faster and faster. Hence the temperature rise is adding up as you see on the graph.

Today, across the world, we store about 60 million tonnes of CO2 with no benefit. We take natural CO2 out of the ground and move it through pipelines depositing it back into a depleted oil reservoir.

To meet our 2040 target, IEA is telling us that we need to capture and store the equivalent of ten thousand million tonnes of CO2. That’s ten gigatons.

Industrial emissions represent about 21 percent of all greenhouse gas emissions.

The plan is simple.

Building materials are vital to our economy.

We need to capture carbon from these production facilities while we do deep decarbonization of the power sector in the transportation sector.

What if we could send CO2 back where it came from?

This is storage or sequestration – capturing it from an industrial plant and putting it back into the ground. We’ve been doing this for the last 30 years and we’re depositing CO2 in saline reservoirs – eight kilometers deep underground and storing the CO2 for a long periods in a safe way.

Why is Svante based in Vancouver?

We have 80 people dedicated to developing a technology that will allow us to capture CO2 at a very low cost. We consider ourselves an emission critical company, and we’re trying to address the challenge associated with climate change. Our end of the pipe solution can reduce worldwide greenhouse gas emissions by 20 percent, focusing solely on industrial emissions. Some of the largest energy producers support us. OGCI is one of our major investors. They represent the 13 largest energy companies with the TOTAL, the BP, the Shell, the Chevron of the world.

We have Chevron as an investor as well as TOTAL as a partner.

We have a unique process that captures, releases, and regenerates the sorbent in a single unit by rotating over a minute.

What is the advantage?

The advantage is a lower capital investment compared to traditional liquid systems where you would need very tall towers to absorb and desorb the CO2 from the flue gas. In our case, because we do everything in one compact system and it’s much smaller. It’s also not made of stainless steel which is a costly material, hence the capital cost reduction

Where do we fit in the industrial marketplace space?

If you were to capture 10 gigatons of CO2 – which is a requirement that IEA is giving us as an objective by 2040, it would cost about 2 trillion dollars to deploy investment capital of plants in the national sector.

Traditional technology, for the same 10 gigatons, we would have to spend four trillion dollars and those are mainly focusing on power plants because of the economic of scale required to meet the cost of that industry.

If you want to collect CO2 from air, it’s called direct air capture and there are three companies working in that space. One of our neighbors is doing work on a liquid-based system to do that. Global Thermostat and Climeworks are doing from a sorbent point of view in a similar solvent material as we have in our industrial plant.

We spent about 2.7 trillion dollars globally over the last decade to deploy solar, pine and wind. So relatively speaking, you would get more bang for your buck with two trillion going after 20 percent of the CO2 emission.

A few months ago we joined forces with two companies under a partnership with Climeworks – focusing on air capture for Climeworks and ourselves. Taking our unique filter and applying it to the air capture process to reduce their capital investment and therefore, the overall costs – in the range of hundred dollars per tonne – and integrating both industrial plays so we can benefit from the waste energy.

This is very promising for a net-zero solution to our industrial partners.

Then there’s an application where you could also do cold storage in a depleted reservoir. You get a price of about $20 per tonne from an Occidental, for example, who would be using it to extract oil.

To reach $50 per tonne, the liquid amine system, would have to go to a plant size about ten thousand tonnes per day, the reference plant that’s existing today is about a five thousand tonnes on a coal power plant.

We crossed the line of $50 per tonne in the production range of two to three thousand tonnes per day, much smaller plants because of the lower CAPEX. That is the volume of what you usually get from the industrial emitters, for example, a cement plant. Therefore, we can open up the application for industrial emissions of CO2 from industrial plants in our plant sites.

Recently – in the last six months or so – many companies in the I.T. industry like Microsoft and Amazon have been pledging to go net-zero for CO2. They’re looking at planting trees, doing energy efficiencies, getting some renewable. Each one of them will probably have in a range of 40 to 50 million tonnes per year that they will have to deal with. Direct air capture is the solution they are considering, but direct air capture is at a price point of about $100 per tonne.

So for the industry now, we need to crack the code of the business model for carbon management, we need to look at it from the end-user perspective.

We believe that that market will evolve in the next ten years. Right now, we’re focusing on entering the market on the 45Q way of monetizing the CO2, but I believe it will open up a market at $100 per tonne on a voluntary price basis.

The demand created by Amazon and Microsoft in their pledge over the next 10 years is going to be overwhelming. There’ll be less capacity available than the demand they will create.

So why are they concerned with emissions in the I.T. industry?

By using electricity to power the cell towers and data centers we all use, it’s consuming the equivalent of about 2 percent of CO2 emission in the world. With the advent of 5G, it will double the power requirement of cell towers plus an increased number of data centers. The industry as a whole will be tagged with being the largest CO2 emitter as a single industry representing 5 percent.

Today, the cement industry has that position. So when you look in the United States, the sources of stationary CO2 are about 2 million tonnes of two gigatons. Then you’re going to find out that the low hanging fruit is based, particularly on the cement industry, in a range of 50 to 80 dollars. So there is a conversion of a price point at 100 dollars.

We’re looking now at mining – capturing and storing CO2 in the United States, primarily in the Permian. Every black line you see, there is an existing CO2 pipeline.

There are about 4700 miles of CO2 pipeline existing in the United States. What we’re trying to do is map out North America.

One of the first projects we’ve announced recently is the project with Lafarge, also in the Permian. We’re connecting less than 50 miles from an existing pipeline, a very large cement plant. And the offtake would be Occidental, who would take the CO2 and put it back into their pipeline network.

Today we have a plant running in Saskatchewan, 30 tonnes per day (TPD). We are in the second phase of a demonstration program with Lafarge.

Also here in Vancouver, where we are installing a 1 TPD facility.

Additionally, we have two upcoming projects in the next few years – one with Chevron – looking at building a 30 TPD plant in California at one of their oil & gas extraction sites. Then, we have our first commercial plant of about 2000 tonnes per day that we’re planning with LarfageHolcim, Occidental, and TOTAL.

We spent the last three years proving the technology to this scale and proved it works. We’ve built a small manufacturing line to produce our nano-filters in BC. Now we’re moving into the industrialization phase.

In three years, we’ll come out with a first of its kind commercial plant ready to be constructed. We’re scaling up our machines to the size required to make these millions of tonnes per year plant, while scaling the manufacturing of our filters to be able to supply for such a plant.

Once we’ve done this project, we’re looking to deploy from 25 to 30 plants of a million tonne to get 50 percent market share of the existing CO2 market today in the United States within the next five years. Using mined CO2, and that’s a 6 to 10 billion dollar capital deployment to achieve this.

We need to stop putting CO2 into the atmosphere. Period. And you know, while we do it, energy efficiency is renewable. One more solution needs to involved. And it’s called carbon capture and storage.

CCS is the most impactful climate mitigation option to pass on to the next generation. 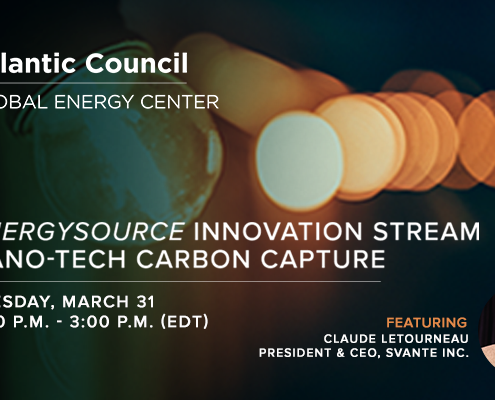 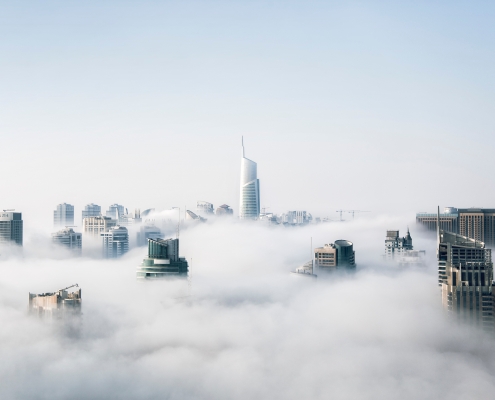 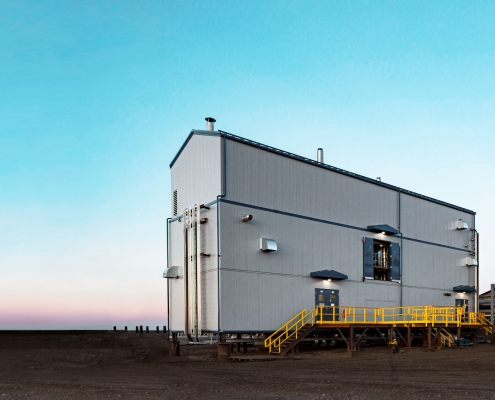 Tweets by svantesolutions
What is Carbon Capture?